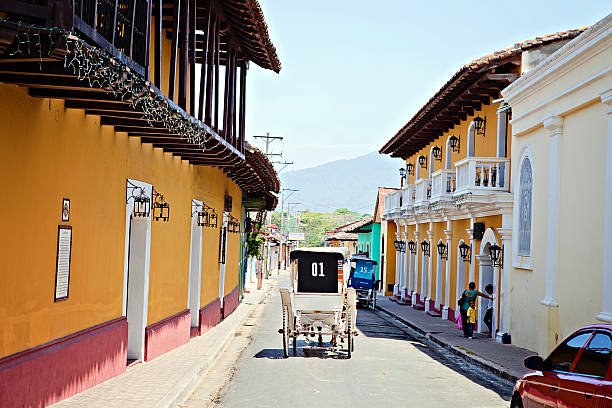 According to my father, a Nicaraguan historian, Granada, the city of my birth, is the oldest city in the Americas, founded in the first quarter of the 1,500’s.  Family folklore has it that I was born at 6:00 a.m. in my mother’s home.

Early that morning my father went off in a horse drawn carriage, the public transportation of the time, to bring the midwife to assist in the delivery.  When they arrived, my mother was in the middle of her struggle pushing me out into the world.  She wanted to get done before my dad’s nosy sisters would show up and make her tense.  In a quick and uneventful birth, I arrived on May 9th, 1948, weighing 9 lbs 12 oz, a chunky baby. I’ve had to struggle to keep the baby fat off all of my life, not always successfully.

My mother wanted to name me Marlene, after Marlene Dietrich, the bombshell German superstar, a beautiful woman that she would see at the movies in Granada.  My dad thought that was total nonsense and said I would be named after my mother – therefore my first name is Celia. For my middle name he picked Julia, his mother’s name; however, since my mother and her mother-in-law were always in a tense relationship – that’s the polite way of putting it – I was taught that Julia was a horrible name and I was never to use it.  To this day I don’t.

Dysfunction in the family was an ever persistent challenge because my father’s mother and sisters competed for my father’s love, attention and money against his obligations to his wife and children.  I would follow my grandmother around, like a puppy, only to be ignored as she preferred her daughters’ children.  None of this appeared clearly to outsiders.

The whole family seemed to be closely knit, and showed up in full force at our home for birthday celebrations bearing gifts.  They were treated to ice cream, cake and punch or chicha as it was called, made from corn or “coyolito”, an Indian derived name for a very tart berry.  The process for making the chicha was laborious.  The preparations started the prior day.  This was not a fermented chicha, but a refreshing flavorful drink, served cold to relieve the body of the intense daily tropical heat.  I remember my aunts rocking in our rattan rocking chairs, cooling themselves off with paper fans and sipping their refreshments. The ice-cream was sometimes homemade and all of us kids had a chance to crank the old ice cream maker and churn the cylinder of cream and fruit inside the outer ice container.  The cake was ordered from the bakery according to the favorite flavor of the birthday boy or girl.

There were many family gatherings celebrating baptisms, birthdays, weddings and graduations.  Other celebrations revolved around the Catholic calendar and involved: fundraisers for the processions of La Purisima, La Semana Santa (Holy Week), Christmas and Novenas. My Aunt Ventura always celebrated the Novena of St Anthony with delicious treats given on the last day.  During the celebration of La Purisima, a Novena, 9 neighborhoods would compete for the best “carrosa” or float which paraded through the neighborhoods and on to the Cathedral, located in the main plaza.  Between birthdays and religious celebrations, there was always something to feel good about, all of them including food appropriate to that time of the year.  You would not serve relleno – pork stuffing, except at Christmas, and Curbasa, fruit cooked slowly with lots of sugar and cinnamon sticks, was only made for Easter.  Nobody cooked on Good Friday when canned salmon and sardines were served as the main course with side dishes prepared in advance. My Aunt Ventura would yell at us if we ran around in the corridors of the house on Good Friday because “Jesus was down”. You would never argue with Aunt Ventura – it was just not done.  All of these memories are vivid in my mind as if they happened yesterday.