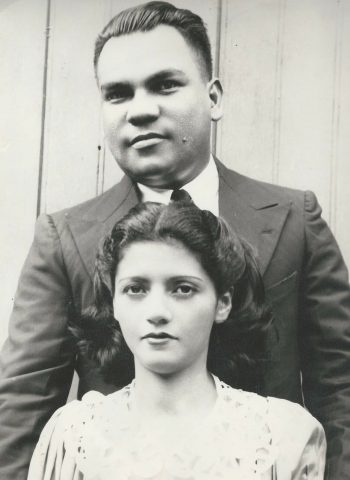 If we could choose our parents, would we choose the same? It’s hard to say.  Our parents are imperfect human beings as we all are.  However, would I like myself if I were very different? The product or another set of parents? Who knows!  I am used to who I am and what I know.  At my age, I must work to improve myself and be more patient, less sedentary, less eager to have an extra helping of all that tastes delicious – and there are other self-improvement measures that I’d rather not disclose.

My father was the oldest of 8 children, born in a household with modest means.  His mother, Julia, was the engine of his household – industrious, fast, sharp, courageous, fiercely loyal to her clan and nobody else.  She had 8 children to feed and was married to a man who was not engineered to be very productive.  He was good looking and kind.  Crafty, also, as with 8 children, he knew it best to hide an orange in his sock drawer so that it would be available when he wanted it.  The trouble was, his kids knew about his stash and giggled about it as kids do when they have one over the adults around. Needless to say, competitiveness was wired into the bunch.

As adults, all of my grandmother’s children had received education or training and were very productive in a country where opportunity is not readily available.  You have to hustle.  Uncle Juan had a small shoe factory with 4-5workers.  Maria was a seamstress and taught dressmaking at a technical school. Lupe sold embroideries and with her husband distributed bottle gas used for cooking. Mercedes sold milk to the neighbors, bought in gallons and sold a quart at a time.  Anita and her husband sold mattresses and beds.  Alejandro put himself through law school and helped his brother Orlando get through medical school. I think I’ve left out one.  It may come back to me later.  Alejandro acted as the patriarch of the family, able and willing to give money when someone needed it or give it to support the tribe.  He was loved and adored and his birthdays were celebrated with a lot of heart. Alejandro belonged to them.

Celia, my mother, lost his mother at the age of 3 to Tetanus after child birth. Her father died when she was 8.  Her Aunt Isabel who did not have any children, took Celia to raise her as her daughter.  Her siblings went to live with different relatives in other cities.  So, my mother did not have a tribe to rely on, to support her or compete with my father’s brood.  She had to fend for herself, difficult or impossible against such a powerful pack.  Her strengths: she was beautiful, articulate, ill tempered when provoked.